We really are spoilt for choice when it comes to great scenery in Ireland. This island is fringed by a ribbon of incredible coastline, with world-famous beaches and dramatic sea cliffs. When you think of cliffs in Ireland, I’m sure it’s the Cliffs of Moher that you think of first. But the truth is, there are so many locations in the country to see captivating cliffs.  Here are some of the Best Cliffs in Ireland.

1. The Cliffs of Moher – The Most Famous Cliffs in Ireland 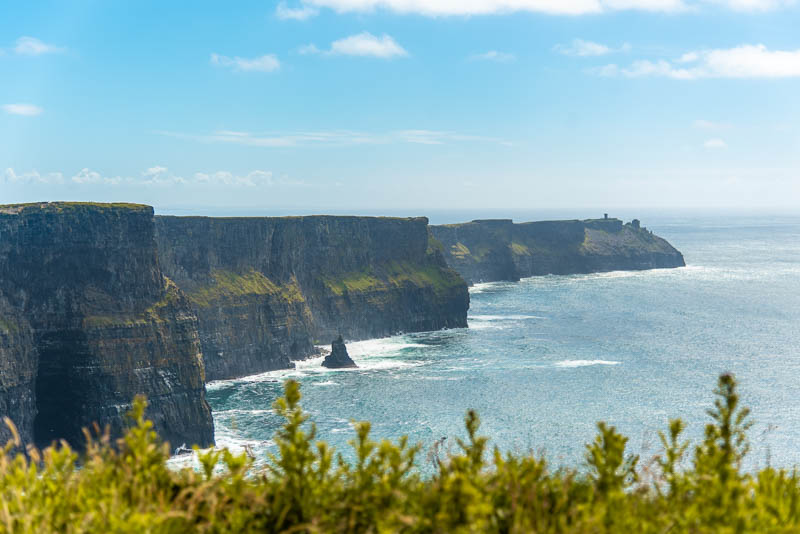 I suppose we’ll start with the most famous cliffs in Ireland. The Cliffs of Moher are Ireland’s second most visited attraction, but the most visited naturally occurring attraction. And for good reason.

Although they’re not the highest cliffs in Ireland, their dramatic sheer drop stretches 14 km along the coast, giving them the “wow” factor. It makes sense that these are the cliffs people flock to see.

It’s also a famous location for having a large puffin community – being one of the rare locations where populations are increasing across Europe.

5 Reasons You Need to Visit the Cliffs of Moher

Slieve League takes the spot for the highest sea cliffs on the island of Ireland, at an impressive 601m above sea level. And even better, they are located in the Coolest Place on The Planet – (according to Lonely Planet)!

These cliffs stand at a whopping 601 m and extend far off into the distance. You can hike along the top, which has been made easier with stone paving slabs recently. Or, just enjoy the views from the viewing platform at Bulas Viewpoint.

While you’re up that far, you may as well check out some of the other wonders in Donegal: Best things to do in Donegal Ireland | The Ultimate Donegal Bucketlist 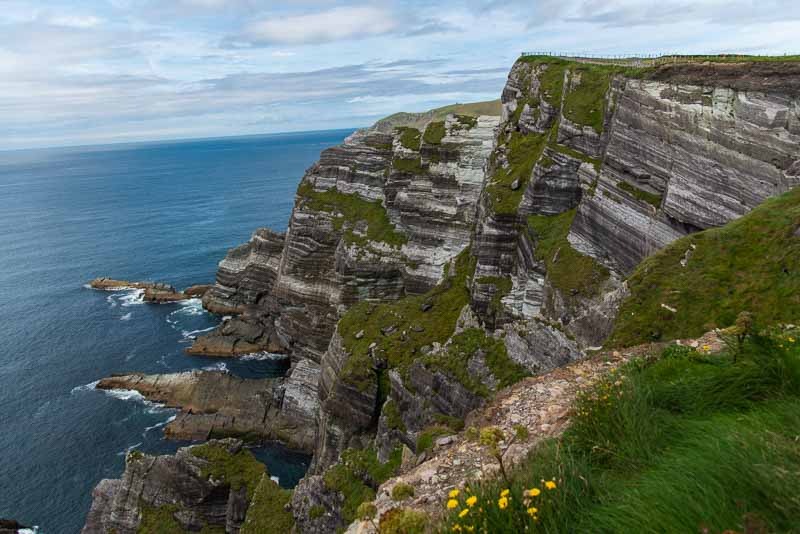 One spot which is not so well known is the Kerry Cliffs.  The Kerry Cliffs are along the Skellig Ring near Portmagee and are a lot quieter than the cliffs mentioned above. There is a large car park which is just 3 minute walk from the best viewpoint. There is a small fee to access the viewpoint – it was 4 euro per person when I visited.

From the viewpoint you can see the detailed strata in the cliff face, giving away the region’s geological history. The pictures don’t do this place justice as the cliffs are incredibly high and impressive here – at 305m high – higher than the Cliffs of Moher even.

The Cliffs are just opposite Puffin Island and the Skellig islands too. So for this small price not only do you experience the cliffs themselves, but get unique views of some of the amazing Kerry coastal views. 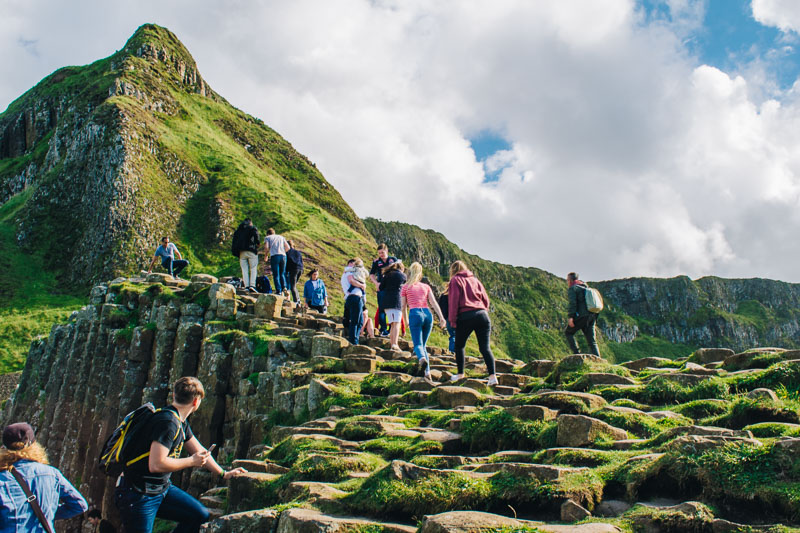 The Giants Causeway is the most well-known feature of the northern coast. But there are also spectacular basalt cliffs along the entire coast. Between Derry and Belfast, you’ll pass by mind-blowing cliff-top views, and there are numerous places you can walk along the cliffs to really experience these cliffs.

The Gobbins Cliff Path is a unique experience where you can walk the coastline on steel bridges hovering above the turbulent sea below.

The most memorable and rewarding walking route is between the Giants Causeway visitor centre and the carrick-a rede bridge location. This route is 16km long and will take up to 5 hours depending on fitness and amount of photo stops! And bonus – it starts and finishes at two of Northern Ireland’s top tourist attractions.

Starting at the charming village of Howth in Dublin, you can take the cliff path along the coast which shows views of Dublin Bay, Ireland’s Eye and Lambay Ireland.

While not as visited as the other cliffs in Ireland, you can hike this beast. Start from either

Inishmore is the largest of the Aran Islands, and here you can experience vertigo-inducing vertical cliffs.  The cliffs are the backdrop to the very famous prehistoric stone fort Dun Aonghasa, which hangs on the edge of the sheer drop.

8. KilKee Cliff Walk in Co Clare – Cliffs in Ireland Other than the Cliffs of Moher 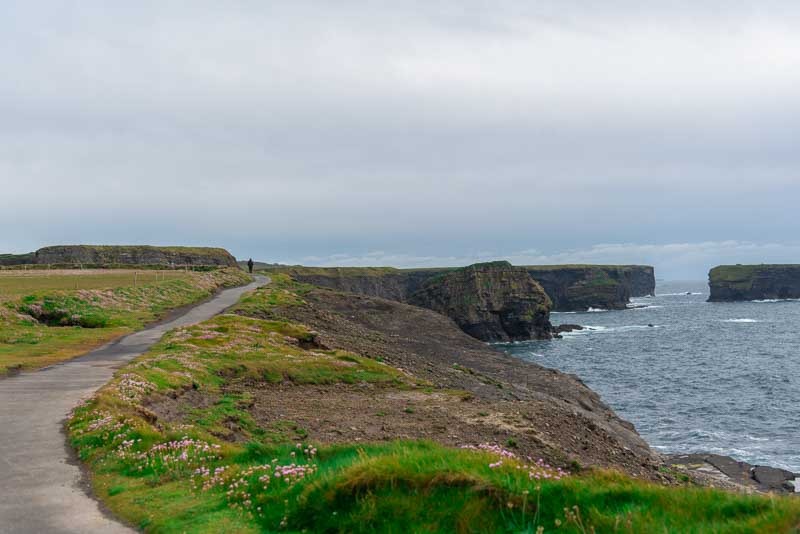 The Kilkee Cliffs in Clare were not on my radar at all. I came across them on a trip around Loop Head Peninsula and they blew me away.

There is no visitor centre, fees or busy queues. There are also no barriers. I could not believe how quiet it was considering the Cliffs of Moher are just an hours drive north.

Take the 5 Km Kilkee Cliff Walk or the 8 Km loop which will give you plenty of time to unwind and enjoy the salty breeze and fresh air. I highly recommend this loop.

So there we have the best cliffs in Ireland. Which is at the top of your list?

The Best Cliffs in Ireland: 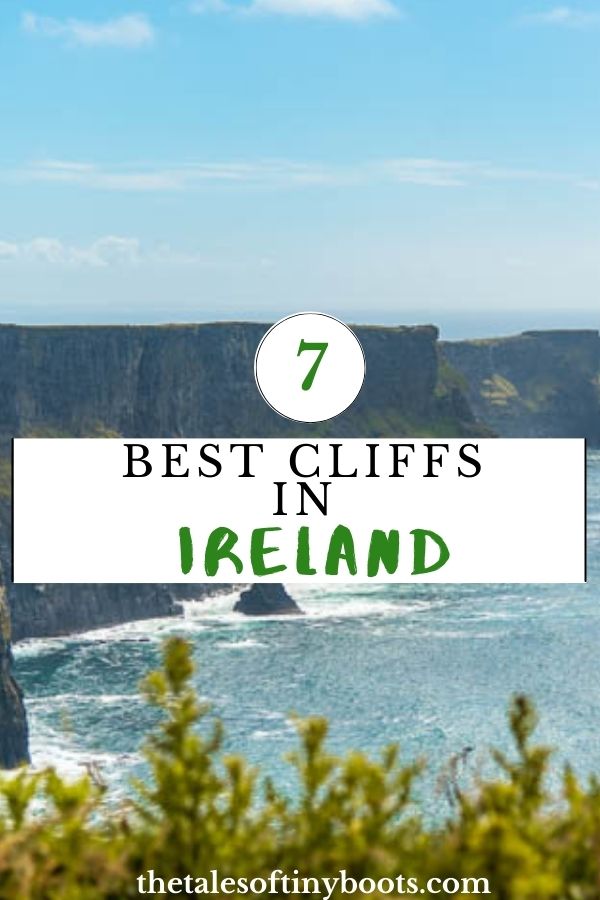 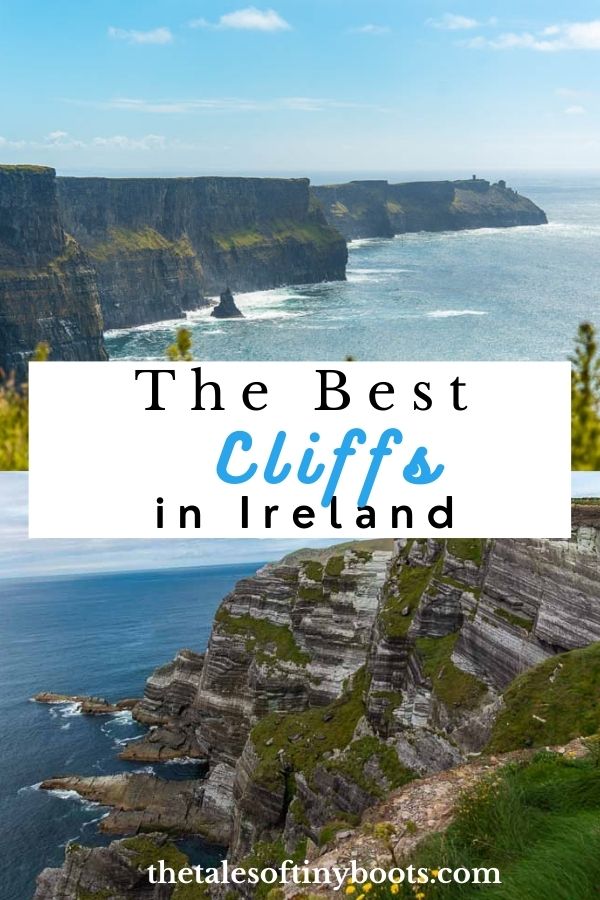 Inspiring Travel Quotes to give you the Travel Bug