Let’s not lie, we all love to get a good Instagram picture. Whether you admit it or not, you feel that buzz of joy with every like notification. Luckily, Galway is the most picturesque city filled with Instagrammable Places. With narrow criss-crossing cobbled streets, colourful street art, and medieval architecture. The whole city is heaving with atmosphere and more importantly, places to make your gram stand out.

It won’t be hard to start wracking up those likes with these Insagrammable places in Galway City:

But first, What does Instagrammable mean?

Instagrammable basically just means anything that is worth posting on Instagram. But in recent years, this definition has really developed into a whole lot more.

As well as referring to anything worth posting on the gram, it means photogenic, attractive and generally, following some Instagram trend – A mysterious girl from the back in a beautiful location, a flat lay of a cup of coffee in a cafe. You know it when you see it!

Instagram is now influencing so much in our lives from our outfits, to our holiday destinations. I mean, people have always wanted to wear nice clothes and visit scenic places, but Instagram has taken this to the next level. So are you ready for your Instagram fix in Galway?

Let’s get into some of the most Instagrammable places in Galway City.

*BUT FIRST, if you would be interesting in taking a tour of Galway’s Instagrammable spots with a Galway photographer and Instagrammer to really up your game, check out the end of the post for Insta Tours Galway*

What says Instagram more than wall murals? Well just on Eyre Square you’ll find stunning wings painted on a wall beside O’Connell’s bar. These were painted by Kelsey Montague. Kelsey is a US artist and has left her artwork in cities all over the world.

The Wings in Galway are part of her “What Lifts You” campaign. The idea is to take a picture at the wings and post it along with what inspires you most. Such a beautiful idea. And there you go, an Instagrammable place in Galway, as well as the caption, sorted all-in-one!

This is the only work done by Kelsey in Ireland, so get Instagramming! My shot will be coming soon. 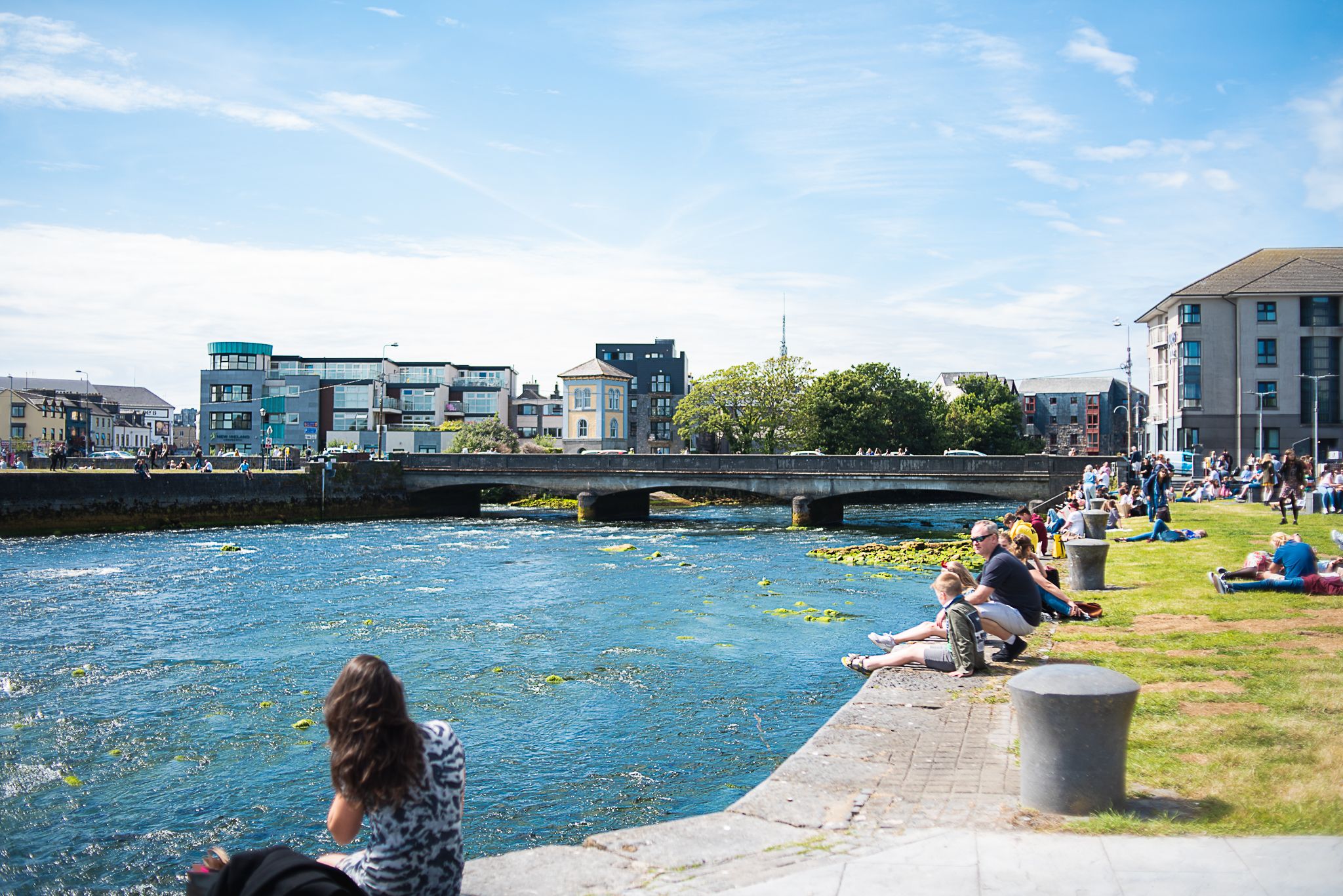 The Long Walk is an iconic row of houses along Galway Bay in the Claddagh area of Galway City. It’s sometimes described as the most photographed street in Galway. While I’m not sure if that’s true, it certainly would be close. It screams Instagram with its row of cute coloured, uneven-sized houses along the waterfront.

*This street also features heavily in Ed Sheeran’s Galway Girl Video – Check back for a post of all the other locations in the video soon.

So, get your creative juices flowing with a stroll down the Long Walk where you’re bound to get that shot for the gram. 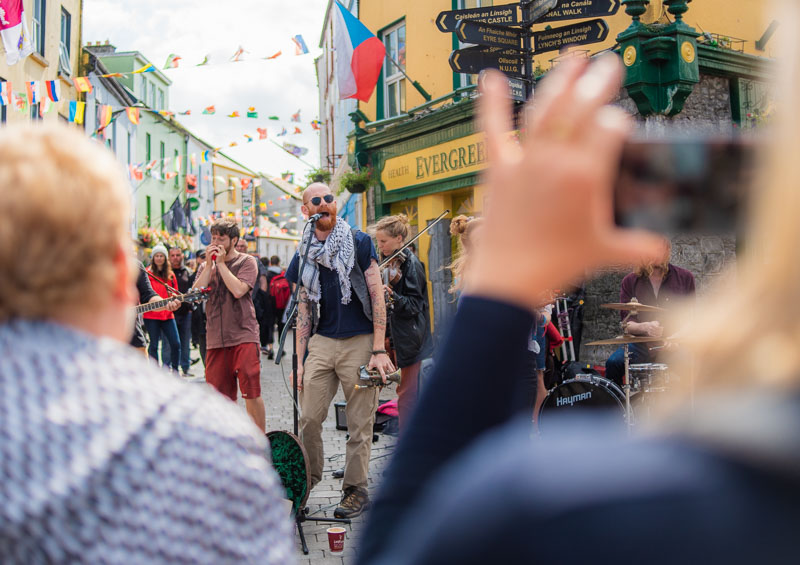 The linear walk from pedestrian shop street to High Street, Quay Street and perpendicular Cross Street is undoubtedly the most walked and most popular streets of the city. Each street bleeds into the next. The cobbled and paved pedestrian path is so charming and picturesque. And on a summers day, the atmosphere is infections. My uncle once said “you can’t walk down shop street without smiling”, and it’s true. 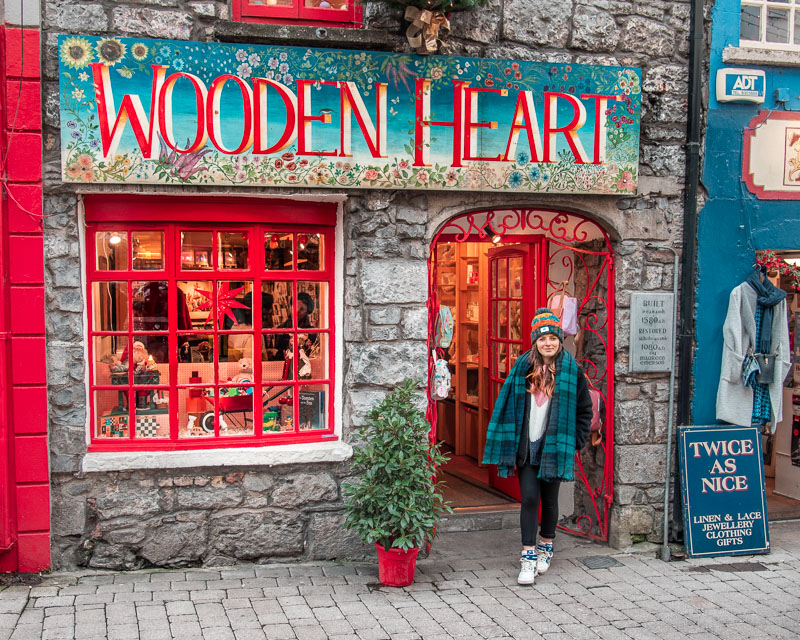 This is probably the most Instagrammable place in Galway and you will see cameras and phones snapping away in every direction. Bustling with tourists, buskers, music, colorful shopfronts and flags; it really is the heart and essence of Galway city. A trip to Galway City would not be complete without getting an Instagram here.

The Canal Walk is a short, but pretty walk placed between the canal and the river Corrib, winding its way along the edge of the city. It starts at the stone archway beside the born clothing store near the Salmon Weir bridge. You can follow it right along to the Claddagh, coming out at the Wolfe Tone Bridge. 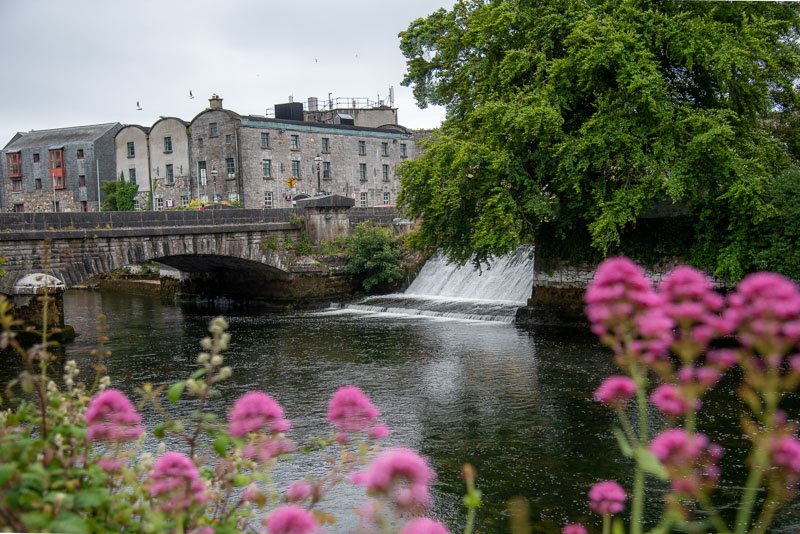 There are Instagrammable locations the whole way along the walk but there is one specific place id recommend. Just before coming up at Bridge Street halfway through the walk, you will get perfect views of the river passing under the bridge and a canal pouring in from the other side. Such an Instagrammable place in Galway!

Galway has a strong history and is the only medieval city in Connacht. There are great instagrammable places in the city reflecting this past. 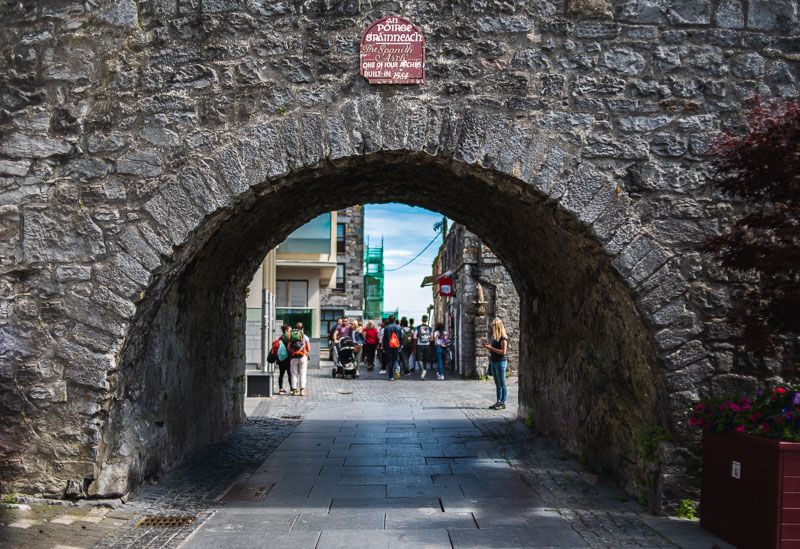 No one knows for sure where the name came from. The Spanish Arch likely received its name due to the Spanish boats that were in and out of the bay regularly. The archway still stands and is the entranceway to the long walk.

It is an extremely Instagrammable place in Galway with the archway and the piece of quay jutting out into the river beside it being popular with locals and tourists alike for sitting and taking in the views.

The Latin Quarter is one of the oldest parts of the city that encompasses its medieval past. It is undoubtedly the most picturesque part of Galway and definitely the most instagrammable. It takes in some places already mentioned like Quay Street and Cross Street but another instrammable place in the Latin quarter is Kirwan’s lane. 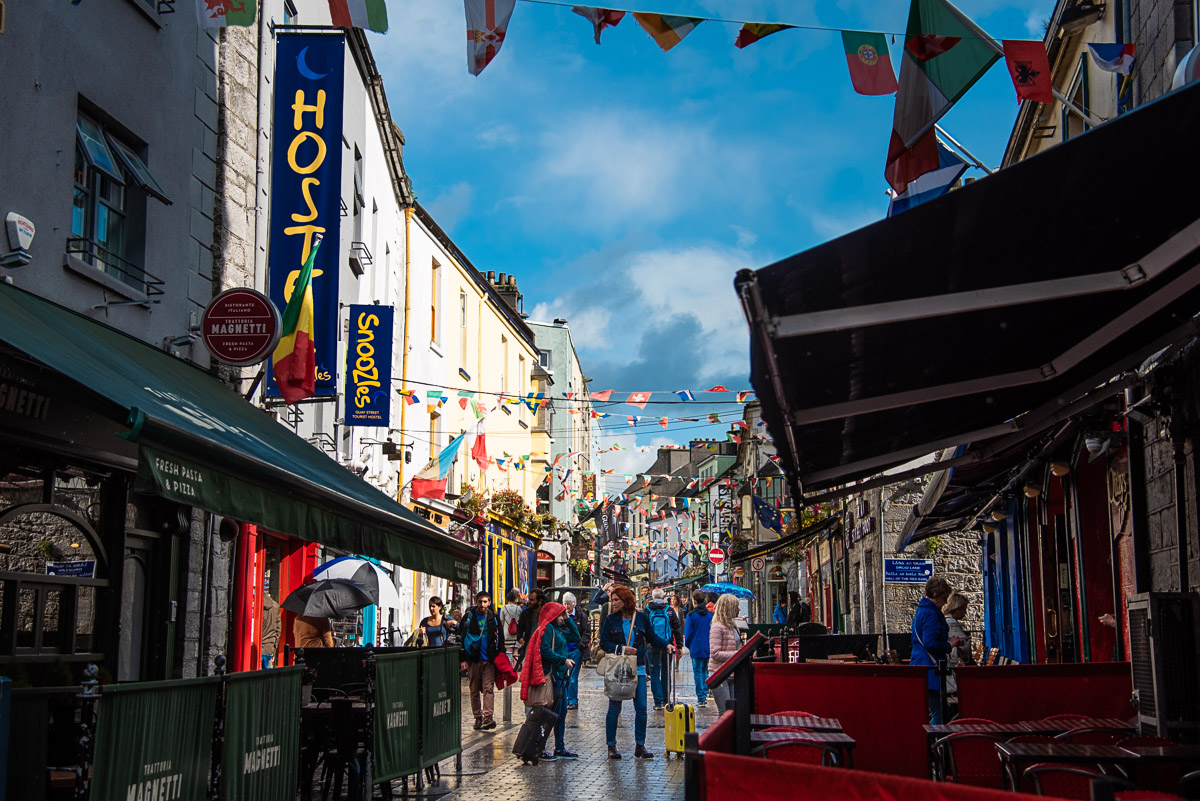 Other Instagrammable places in Galway

The Claddagh was once a separate fishing village and the oldest area of the city. it’s close to the city centre being just a couple minutes walk away. In its day, the area was lined with thatched cottages but sadly these are gone now.

It is so beautiful at sunset and a great place to get your camera out. In summer you’ll find every inch of ground occupied. As the place is thronged with people, drinking along the water enjoying the sun.

The Claddagh ring also originated here over 400 years ago. 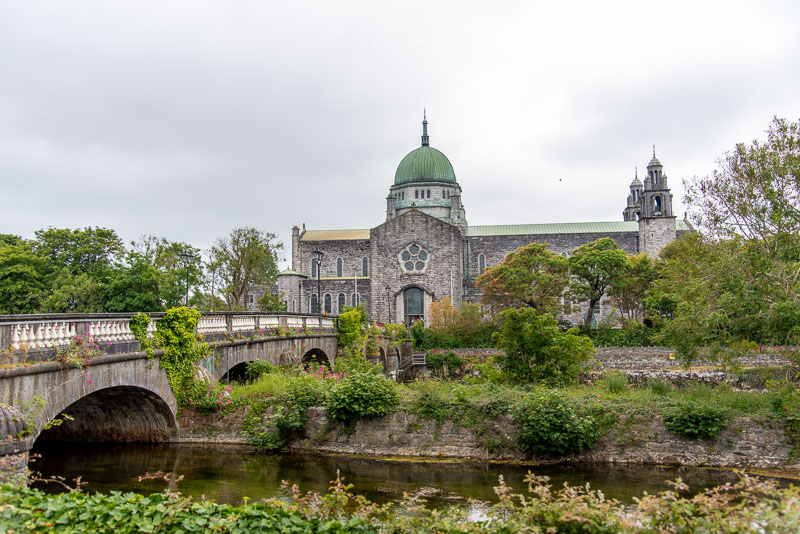 The cathedral stands bold along the River Corrib and although not religious myself, I can’t deny that it makes for a great photograph. With the Salmon Weir Bridge and the canal and river running in front, you are sure to get that Instagram shot.

While not technically part of the city, Salthill diving board can not be left out of instagrammable places in Galway. In the nearby village of Salthill just 1.4 km from the city, it is walking distance along the beautiful coast.

The diving board is for sure the most instagrammed part of Salthill. Whether there are people queuing down the steps to jump off in summer or the angry waves are hurling themselves over the top of it in winter, it’s a great place to get some shots.

Although originally rejected when being built, it’s now the most iconic spot in Salthill.

Map of Instagrammable Places in Galway

Luckily with Galway being such a small city, all the attractions are super close together and are walkable distance from one another. You can see all the instagrammable places in Galway in a short space of time and while exploring the rest of the city. Below is a map of the way I recommend you see them: 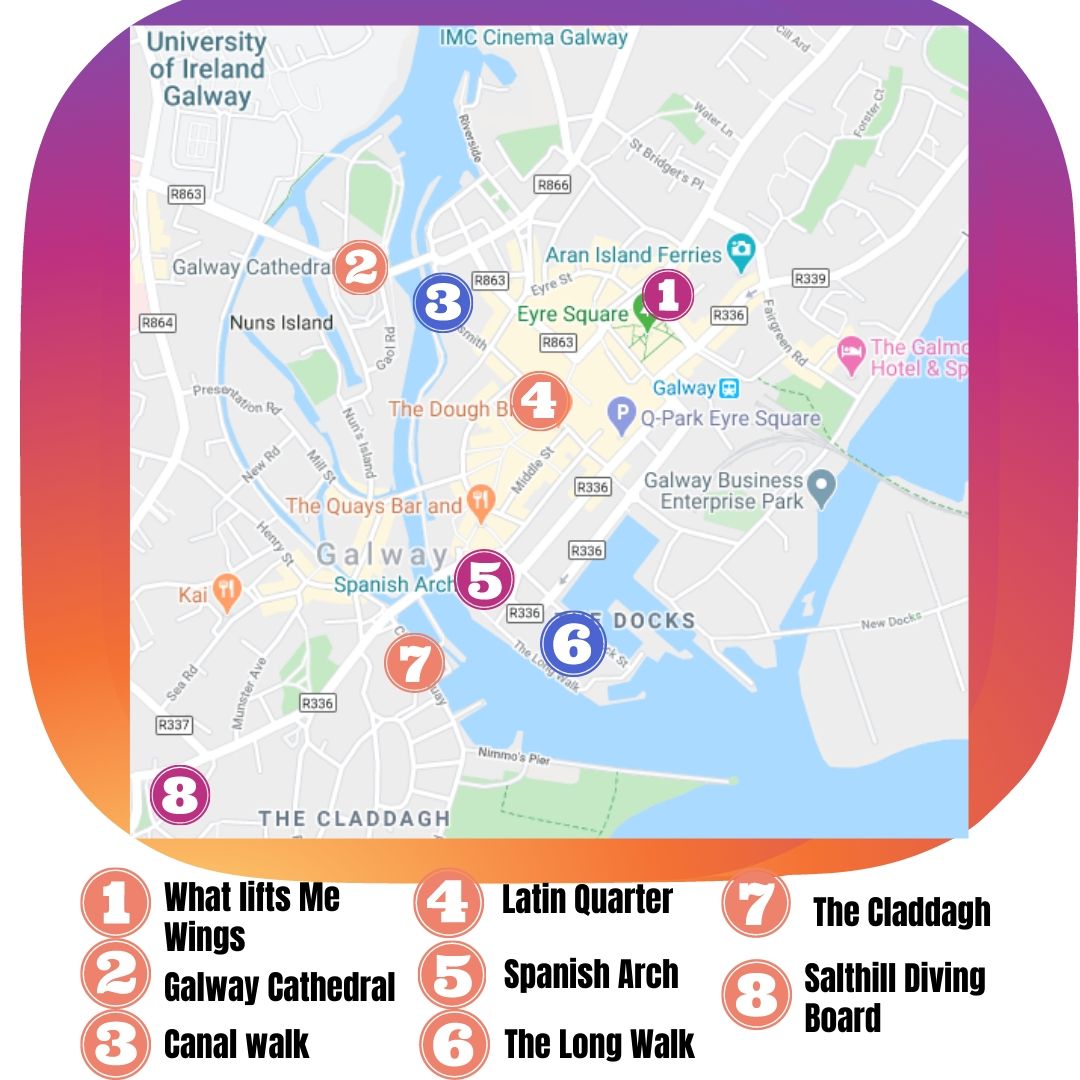 While you can visit these locations in any order you wish, I’ve put this together to be the most efficient way to see the Instagrammable places in the city. I also considered the time of day and business while making the map. I recommend going early before it is too busy. From *quiet* Eyre Square in the morning, you can walk out and back in to the city, stopping off at Galway Cathedral and coming back into the city by the Canal walk.

This would be a great time to stop off for lunch which is why I have the Latin quarter next. Restaurants with mouthwatering food in every direction. If you’d like to see my favourite restaurants, click to view my “coolest places to eat in Galway” post.

After that is a good time to go out and enjoy the Claddagh, including the Spanish arch and Long walk. Hopefully, the sun won’t be too high by the time you go out this direction meaning the lighting won’t be too harsh for your Instagram shots too! 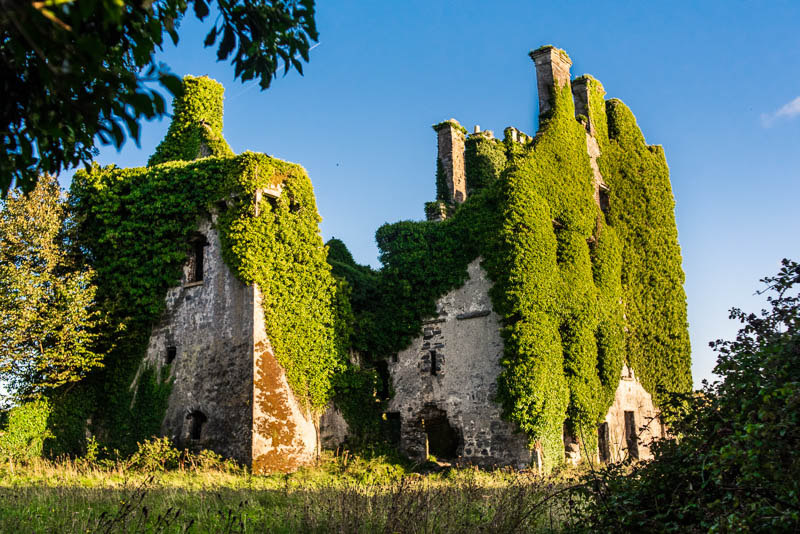 Interested in a Guided Tour of the Insta Hotspots?

Insta Tours have just expanded to Cork and Galway city. What does this mean? It means you can do a guided tour of these spots plus some more with a Galway Photographer and Instagrammer. You will get the best photography tips as well as get answers to any questions on upping your Instagram game too.

What will you get from booking into an Insta Tour of Galway?

If you want to book a tour, please check out this link: https://insta.tours/galway-walking-tour/

You never know, maybe I’ll be your tour guide!

Now that you’ve got your amazing Instagram shots, you need to consider the best hashtags to use to get the best reach and show them off.

There are so many hashtags to choose from and I always recommend doing some research to pick the best ones to suit your shot, these are my go-to Galway and Ireland hashtags: 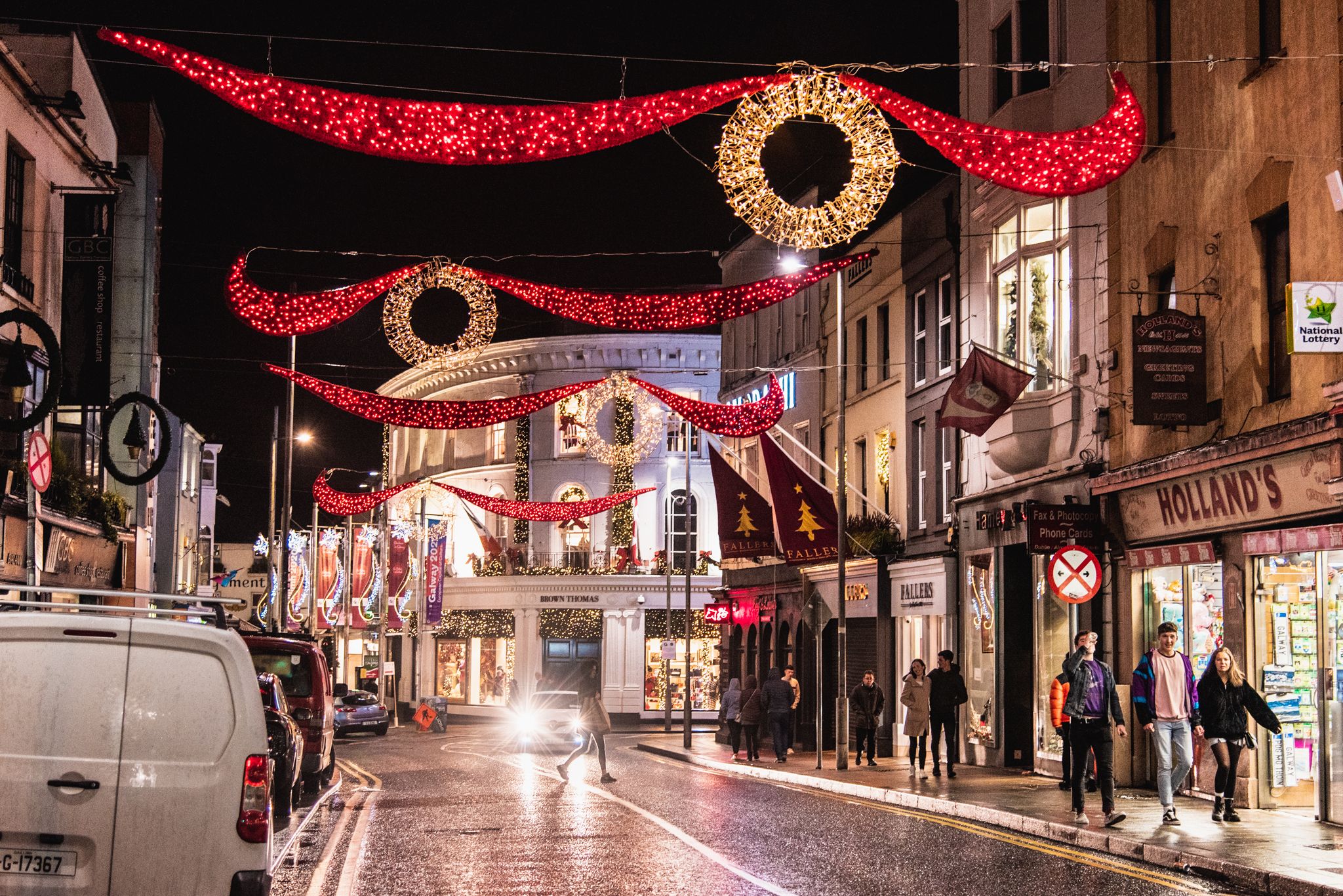 Instagram captions can also have an effect on how well your post does. While I like to discuss what was happening around taking the picture, there’s nothing wrong with a simple quote caption. It is said that longer captions do the best with your photos but ultimately it is the shot that counts. Whether you want to do a who/what/where/why caption or simply “Galway girl” it’s up to you. Personally I do prefer longer captions and enjoy reading what people have to say.

Song quotes including Mentions Of Galway

So there you have it. The best Instagrammable places in Galway city as well as the hashtags and captions to ensure your new post gets the reach it deserves.

I hope you enjoyed my post on “the most Instagrammable places in Galway City” and found it helpful. If you did,

and tell me how it helped!

Please note, Images are my own and are subject to the laws of copyright. 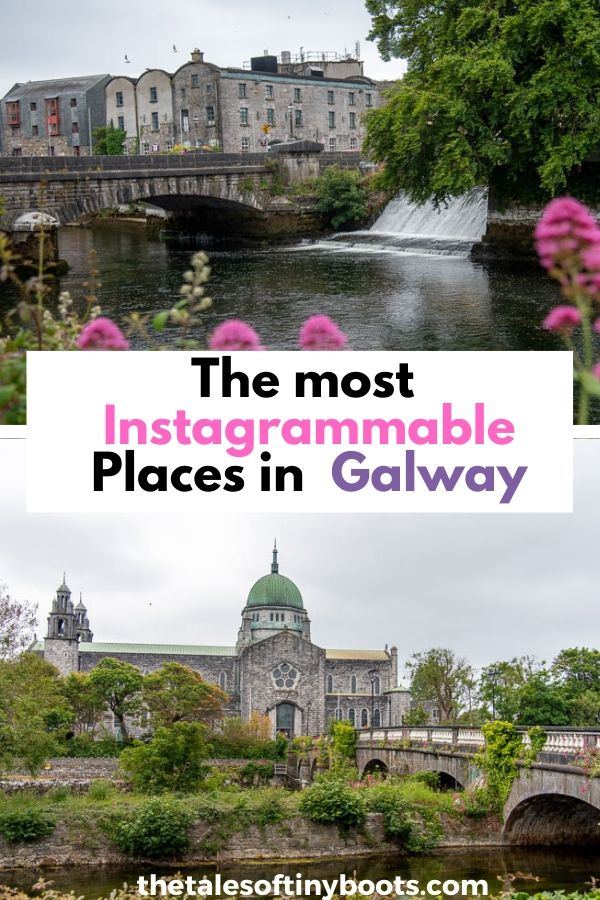 Other places to visit in Galway:

Cool Places to Eat in Galway

Why you should go to the Macnas Halloween parade in Galway 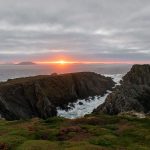 Malin Head – A Guide to Visiting Ireland’s Most Northerly Point 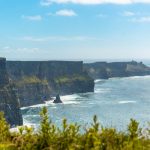 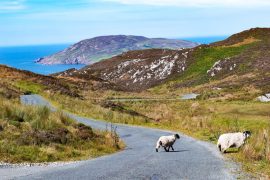 Best things to do in Donegal Ireland | The Ultimate Donegal Bucketlist 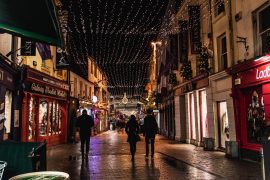 Why Galway is better than Dublin | Galway city Vs Dublin city