For those of you who don’t know, Harry Potter came to life while JK Rowling was living in Edinburgh. Walking around this undeniably magical city, you will see inspiration for the series at every turn. If you find yourself in Edinburgh, here’s 6 Harry Potter Locations you must visit: 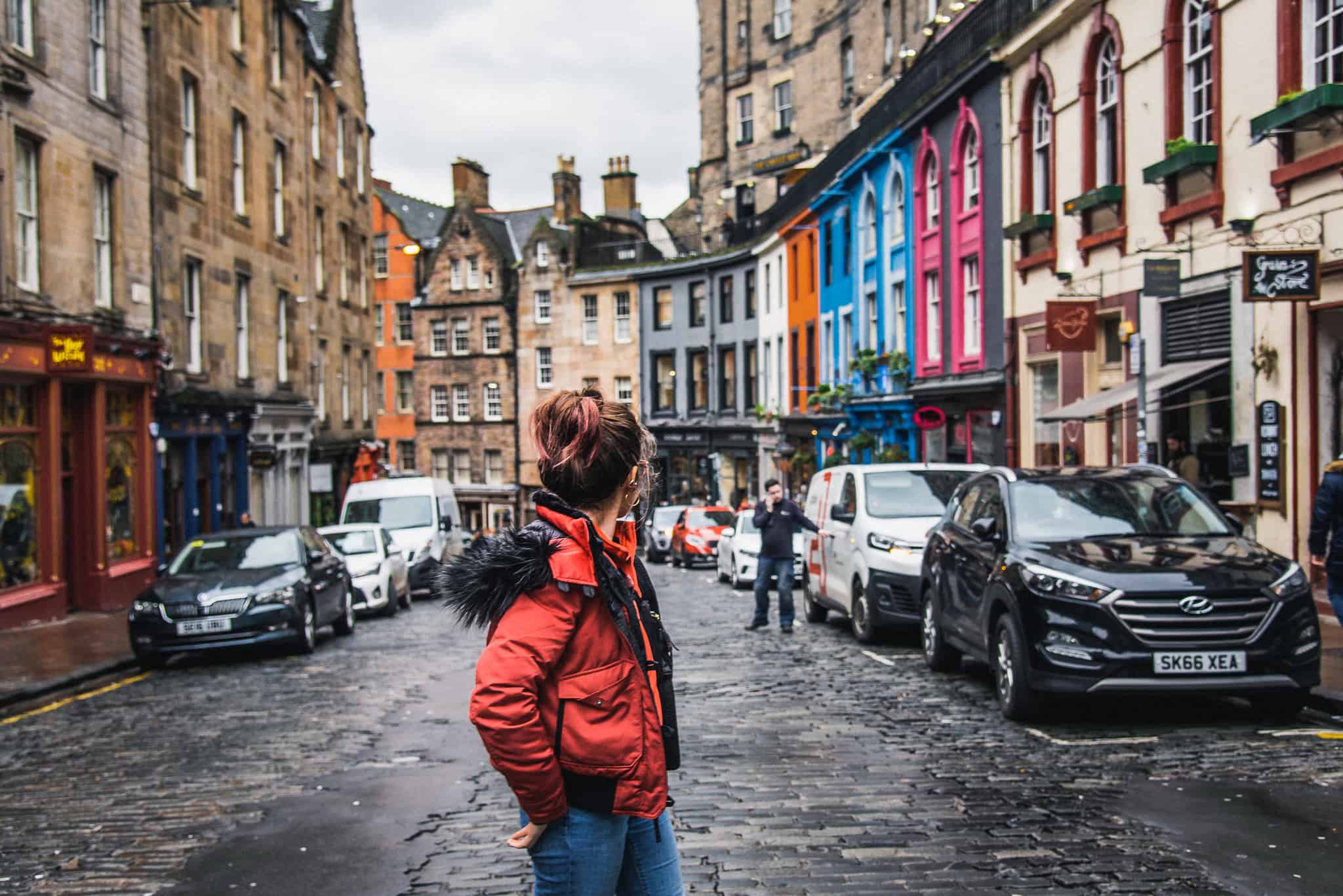 Apparently Victoria Street inspired Diagon Alley, and I wouldn’t doubt that at all. Such a quirky little street bursting with the brightest and coolest shops. A Curved, colourful and cobbled street with an upper story on it. You can’t get any more Diagon Alley than that right?

How to find it: Victora Street is in the Old town. If you are following the Royal Mile towards Edinburgh Castle, take a right at the crossroads on Lawnmarket street at the Bank of Scotland. This takes you onto George IV Bridge. Victoria Street is the first right. 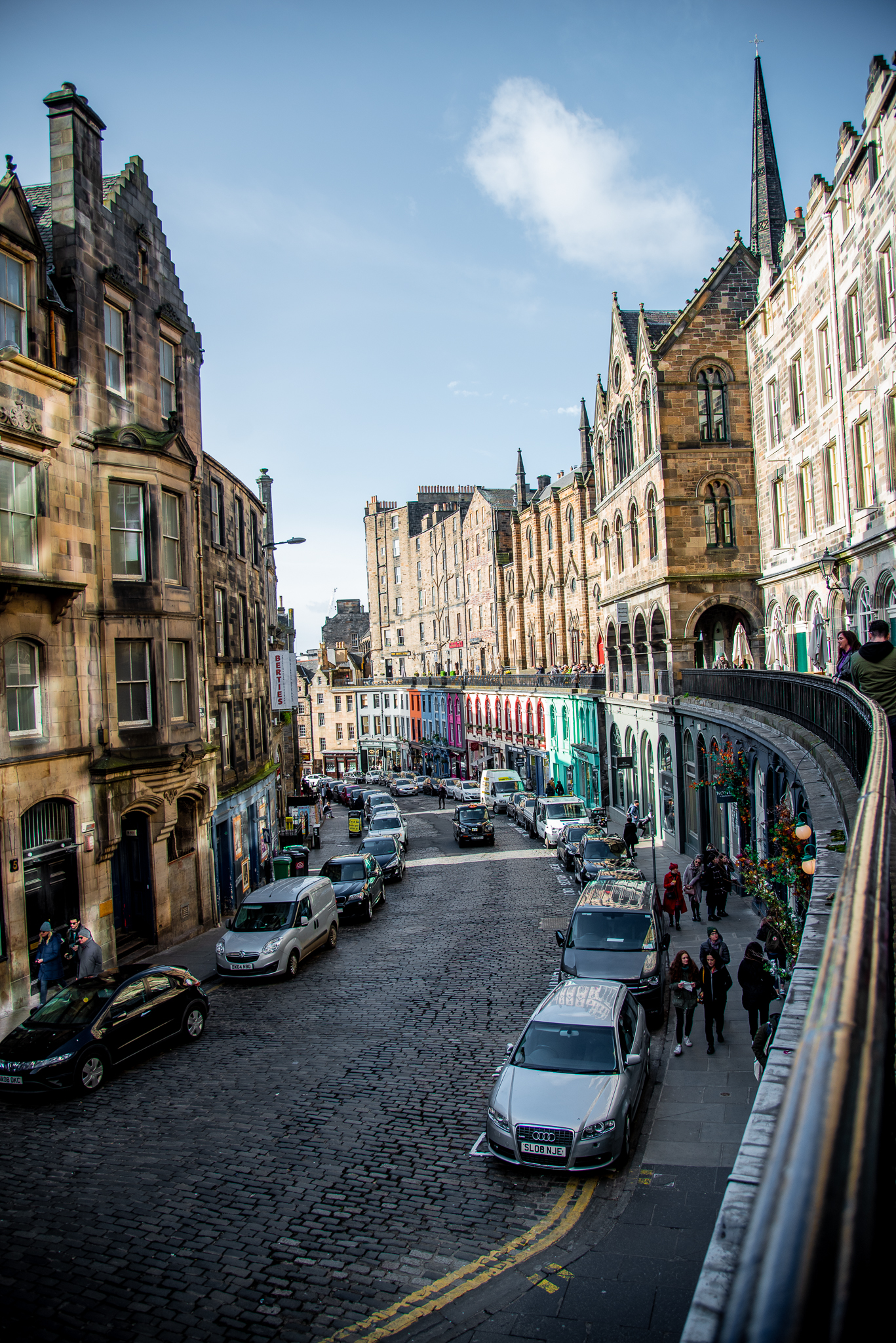 For directions, check out the map below: 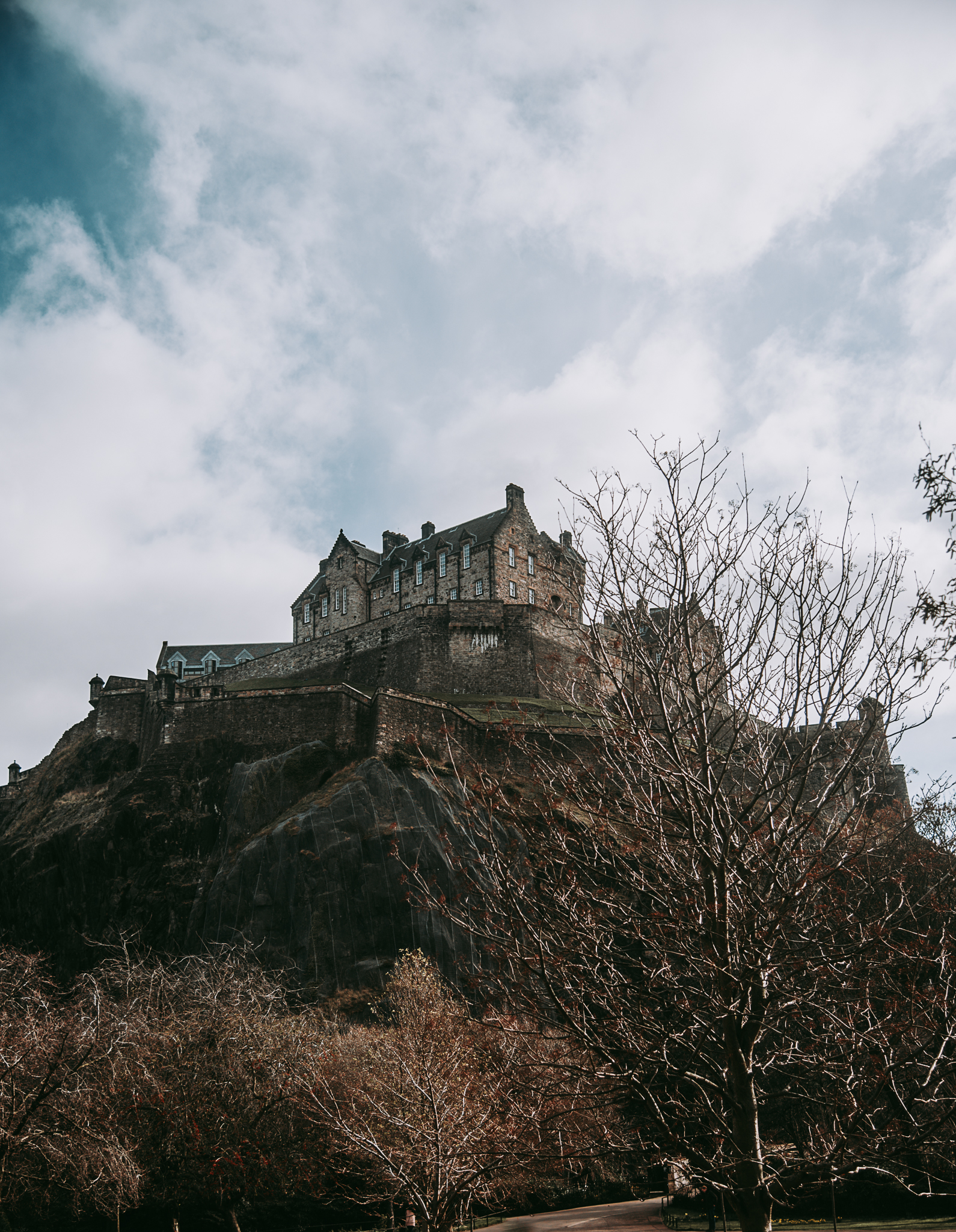 Edinburgh castle sits magestically on top of a high jagged mountain in the city. You can’t help but think of Hogwarts which, funnily enough, is described as being “perched on top a high mountain, it’s windows sparkling in the starry sky”. See the connection? Surely it served as inspiration.

How to find it: The Castle is so easy to find. In the Old Town, follow the Royal mile route which leads right to it. You can’t miss it really! 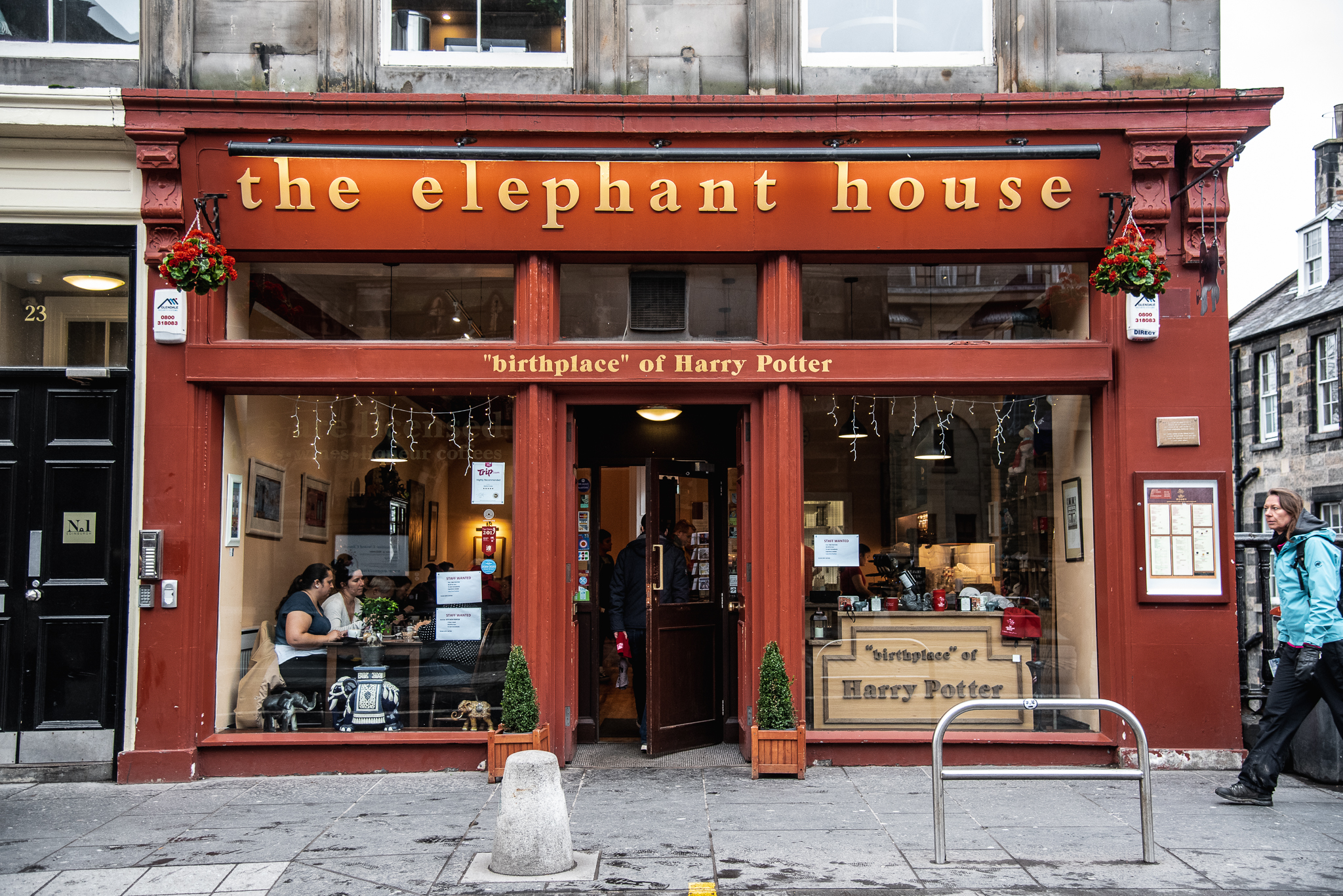 This cosy cafe may look like any aul cafe – but wait, it’s the “birthplace of Harry Potter“, as you can see from the sign above the door! YEP, early in her Harry Potter writing days, J.K. Rowling used to sit in here and put pen to paper.

Apparently every inch of the toilets is covered in quotes from the books and messages from fans. I didn’t know at the time so I never went to look, I’ve seen the pictures though. My fav was “I’d get sleazy for Ron Weasley” – you and me both!

How to find it: It’s also super easy to find. Following my directions for Victoria street, after taking a left turn off the Royal Mile at the Bank of Scotland, instead of taking a right onto Victoria street, keep on George IV Bridge for a few minutes. You will pass right by the Elephant Cafe on the left side of the road.

J.K Rowling is also known to have written a big chunk of the Harry Potter world in a cafe called Nicolson’s and has mentioned this in the past, and was a cafe she was really fond of.  However today it’s known as Spoon. Although it’s not wizarding themed, you can actually sit and eat in a room where Rowlings creativity ran wild. Why wouldn’t ya want to?! 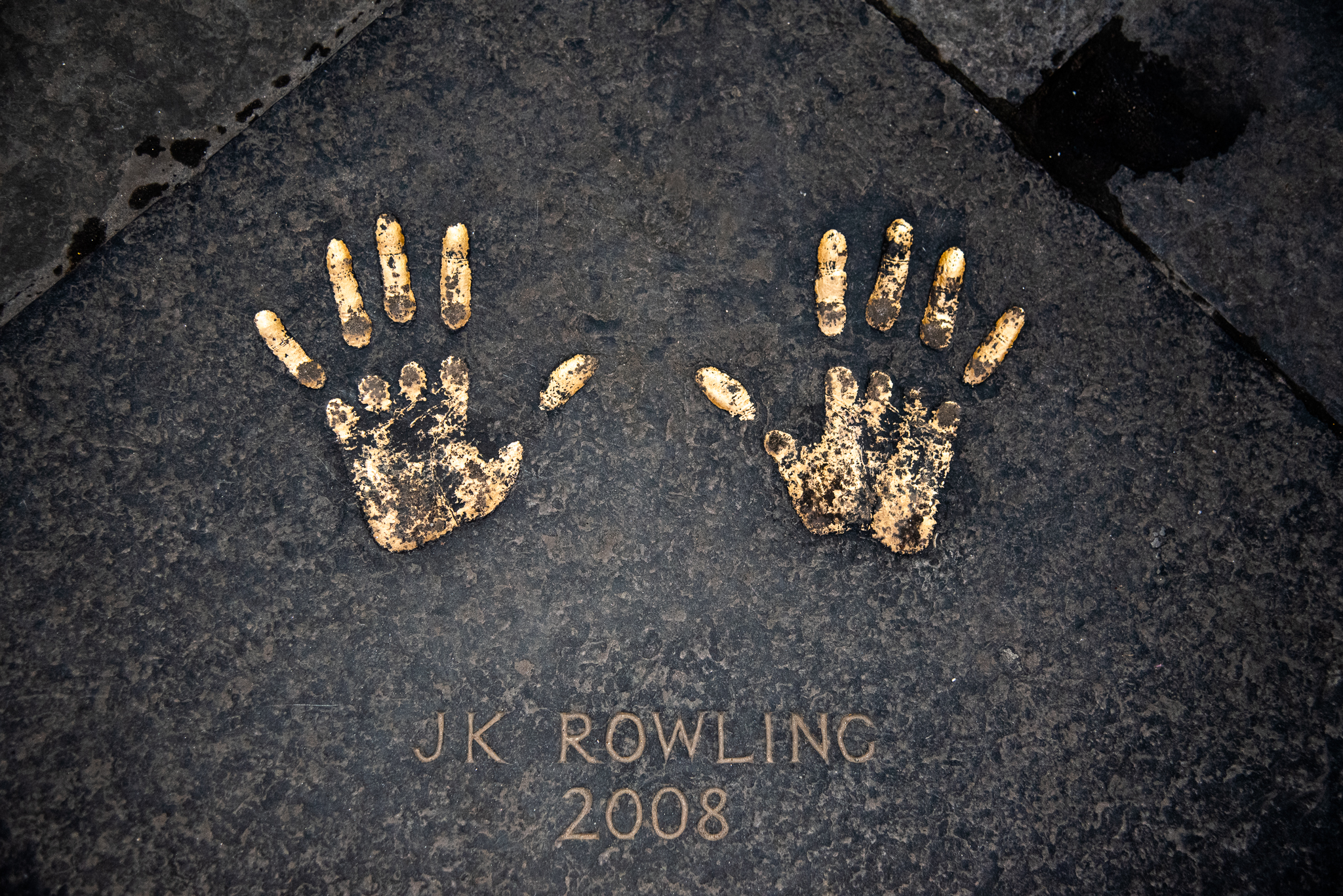 You can go see J.k Rowling’s actual hands!! They’ve been forever preserved outside the City of Chambers. It took me forever to find them!! Was looking for ages and Eoghan ended up finding them straight away.

How to find it: Once again there is a running theme – You can find em along the Royal Mile, just in off the street at Edinburgh City Chambers. Walking towards the castle it’s on your right. 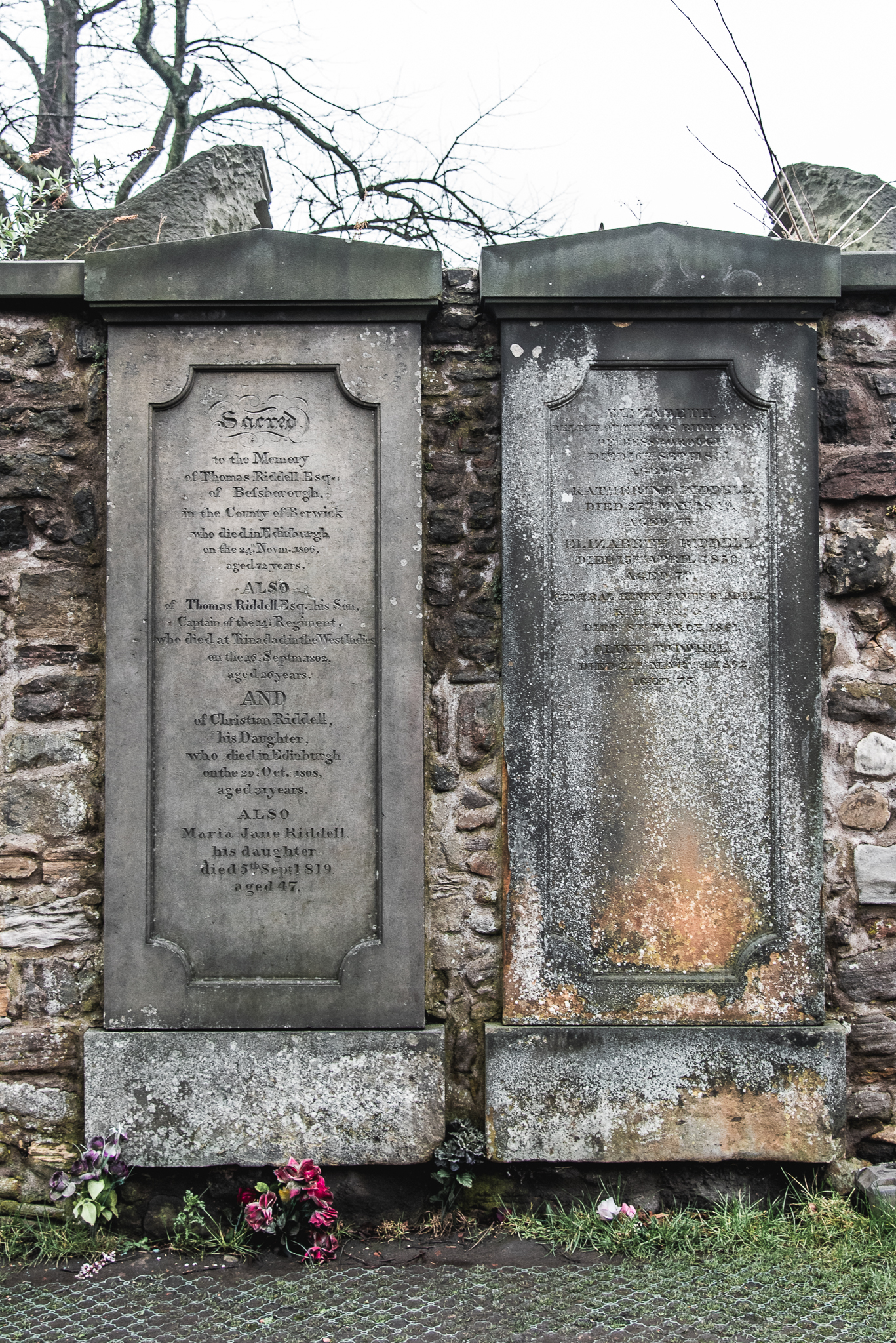 The resting place of Tom Riddle senior himself. It’s well known that J.K Rowling got the inspiration for some of the characters from names off headstones in this graveyard. If you have a walk around you may see some familiar names – McGonagal for one. I’ll let you find the rest!  It took quite a while to find it Thomas Riddle. I was going to leave hints to it here but yano what, where’s the fun in that! 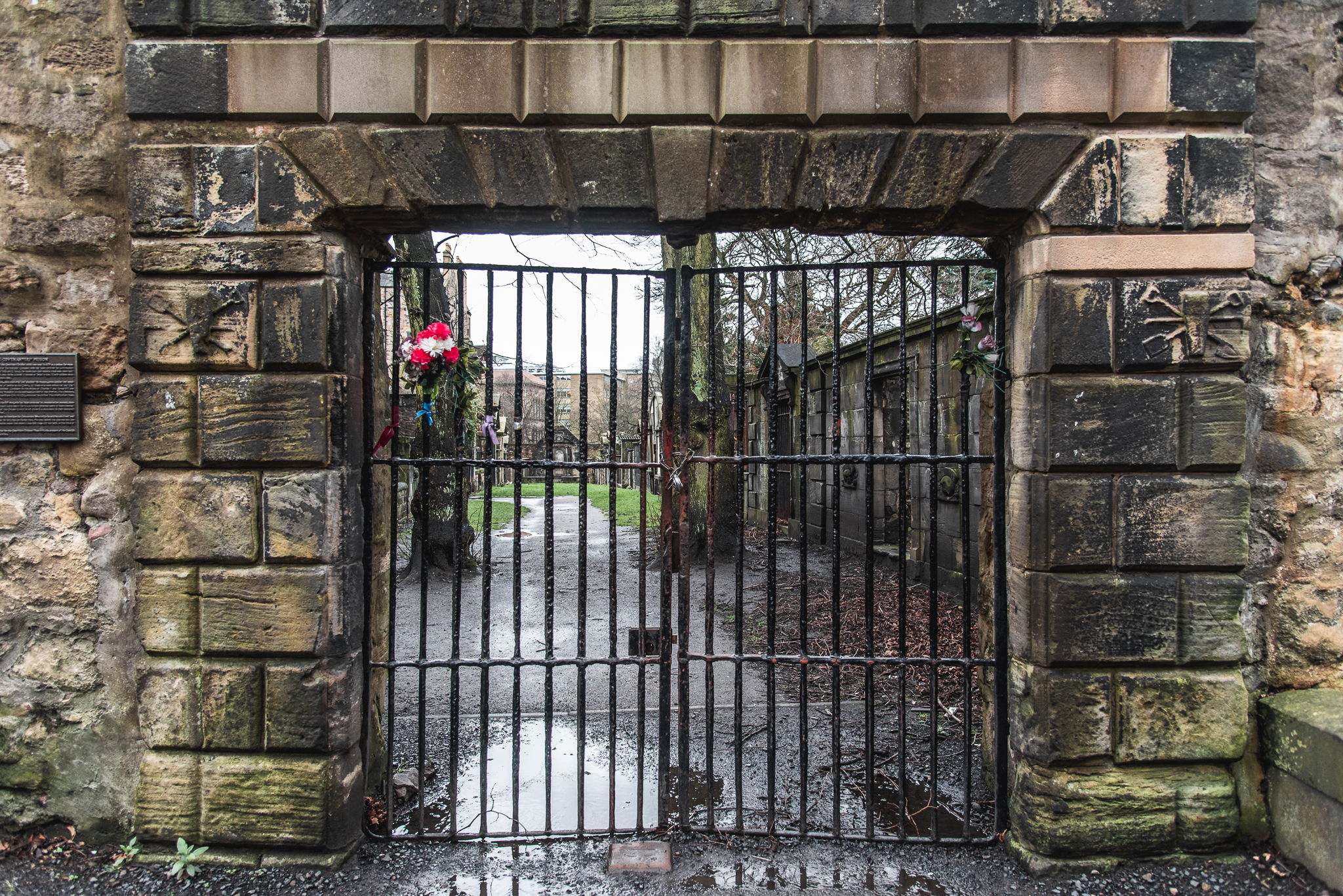 I initially felt really weird about going here. Torn by my inner HP geek but also feeling weird about going to see a grave who belongs to an actual person and not V-man himself. I opted to go to the graveyard and have a wander, and try and not think about it too much. If you do visit, just be respectful.

How to find it: The Graveyard is also along George IV Bridge, just passed the Elephant House also on the right.

6. SO MANY Harry Potter shops 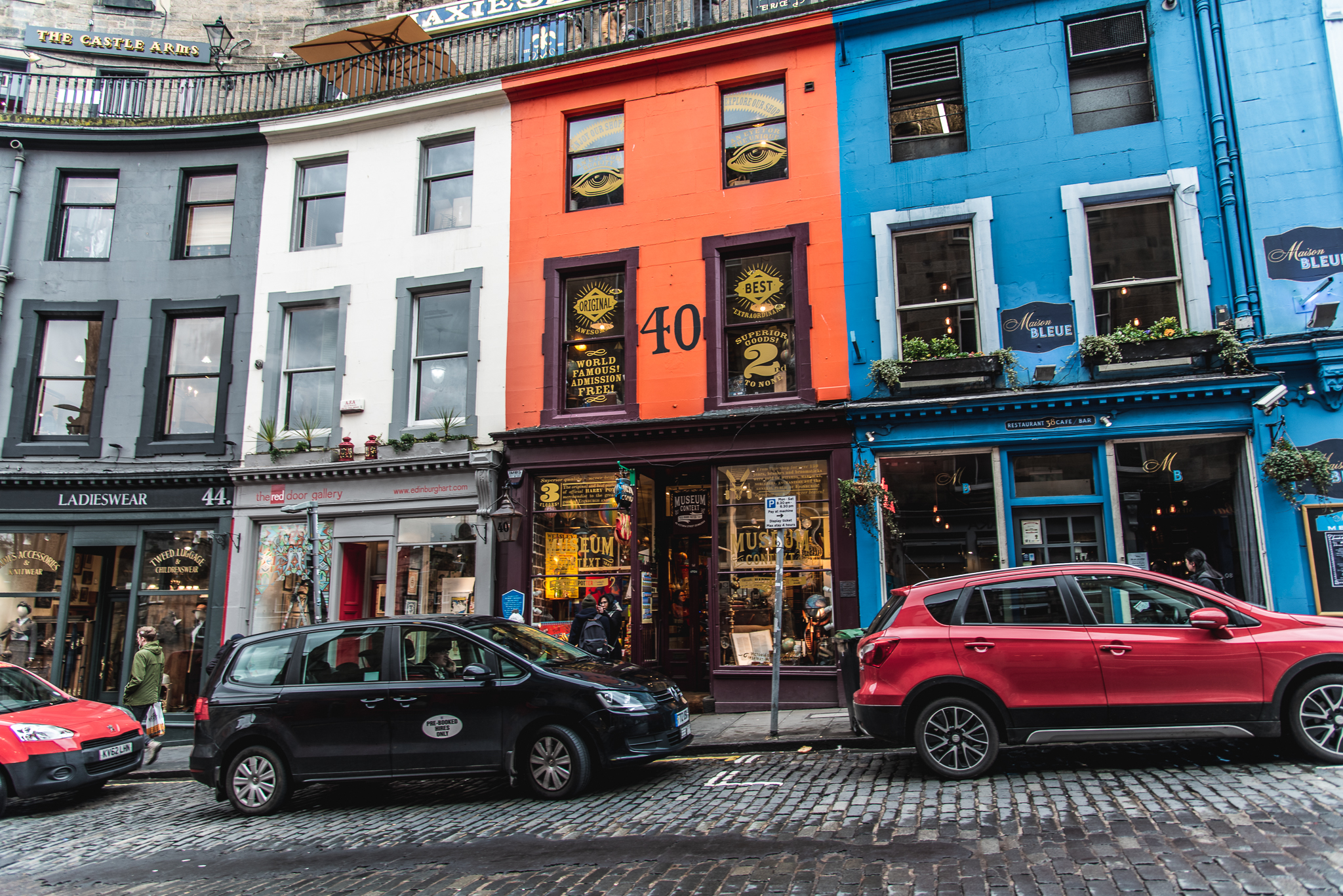 I love Harry Potter. I’ve read the series over 17 times. Still though, never been one for merch – but even I had to refrain from buying the maroon R Jumper. Who wouldn’t want a Ronald Weasley Christmas Jumper?! These shops had all the HP merch you would dream of – from wands to robs, brooms to Bertie Botts every Flavour Beans.

The Context museum was my favorite. You can find it on Victoria Street. It actually reminded me so much of what the Weasley joke shop would have been like –  small and slightly cramped, but floor upon floor busting with magical delights.

If you go up the rickety wooden stairs right to the top, there is a Harry Potter photo station set up with props. Sure ya might as well while you’re there. As you can see, I had too much fun there! 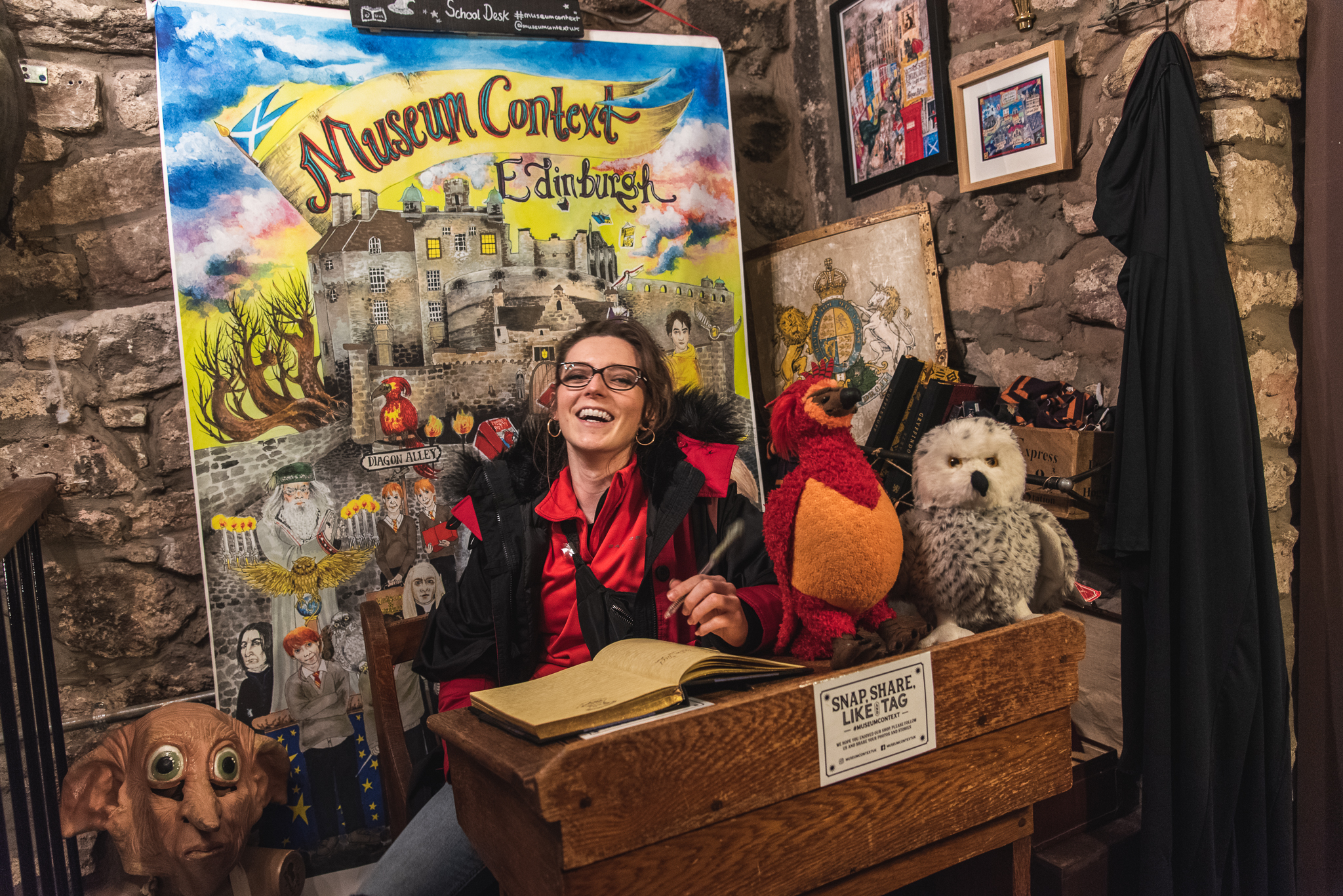 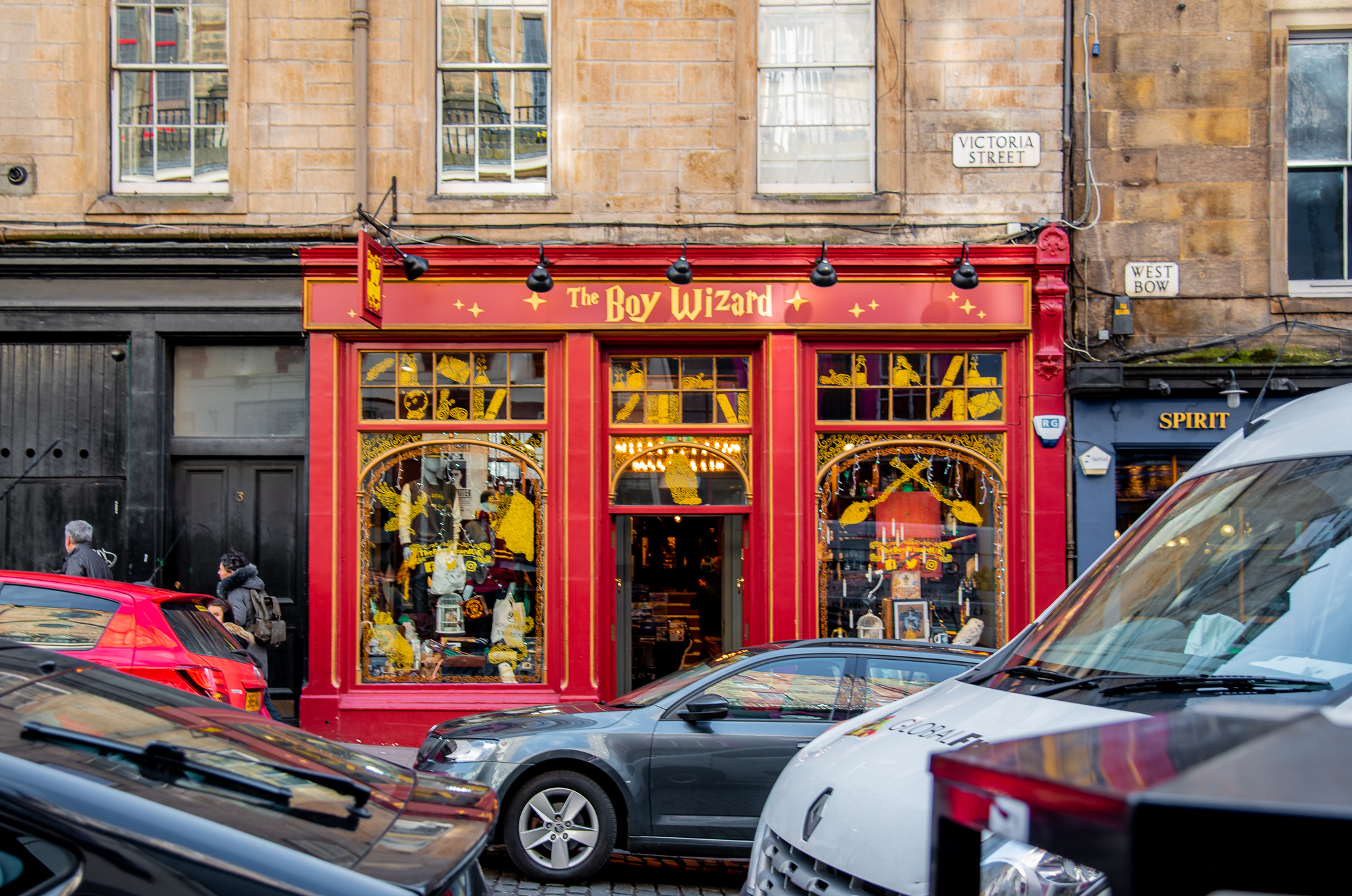 This is the shop I came across the Ron winter jumper. It brought me right back to reading all those Christmas chapters and being so jealous I didn’t get to wake up on Christmas morning in Hogwarts. You can get full sets of quidditch robes and they have every single HP funco pop character you could ever want. It’s worth a look!

This bar welcomes in all witches and wizards – or those just wanting to soak up a bit of magical atmosphere and a bit of butterbeer.

Kitted out with mismatched chairs, cobwebbed and ivy-covered walls, and an eclectic mix of artifacts, the wizarding world theme is obvious.

Oh and did I mention, you can mix your own magic-themed cocktails!

Where is the Magic Potions Tavern? It is just off the Royal Mile on Blair Street. Check out the Facebook page for more info.

This cocktail bar: sitting around in robes with magic wands brewing your own potions (cocktails). I don’t know about you but that sounds like my kind of evening!

As well as immersing yourself in the wizarding world with this fun experience, you will also get to make 2 cocktails as well as receive a welcome drink.

It is a 1-hour 45-minute experience and is just 5 minutes walk from the Royal Mile, on Frederick Street.

Although The Dog House mightn’t be an obvious Harry Potter location in Edinburgh it now sells butterbeer.

PLUS as the name suggests, it is dog friendly. It’s worth it enough to go just to fuss over other people’s dogs, but you might as well get a butterbeer while you’re there.

In Edinburgh, you will find none other than – wait for it – The Department of Magic Escape Rooms! I mean could it be more perfectly named?! These Escape rooms are full of mystery and magic.

There are currently 4 rooms with 50 minutes of game time. Afterward, you can sit and relax in the  Magic Potions Tavern.

Why are there so many Harry Potter places to visit in Edinburgh?

There is a reason why so many places in Edinburgh city are associated with Harry Potter. J.K. Rowling used to live there. She lives in Cramond which is a suburb in Edinburgh. She moved there ni 1993 and so was in the city the majority of the time she was writing the Harry Potter books.

Rowling has even mentioned that “Edinburgh is very much home for me and is the place where Harry evolved over seven books and many, many hours of writing in Cafes”.

So there you have it. Six Harry Potter locations in Edinburgh you need to check out. I had fun going around finding them but you can actually do a guided tour which would be pretty cool too. You can check out the tour on their site.

If I missed any spots, please leave them in the comments below! 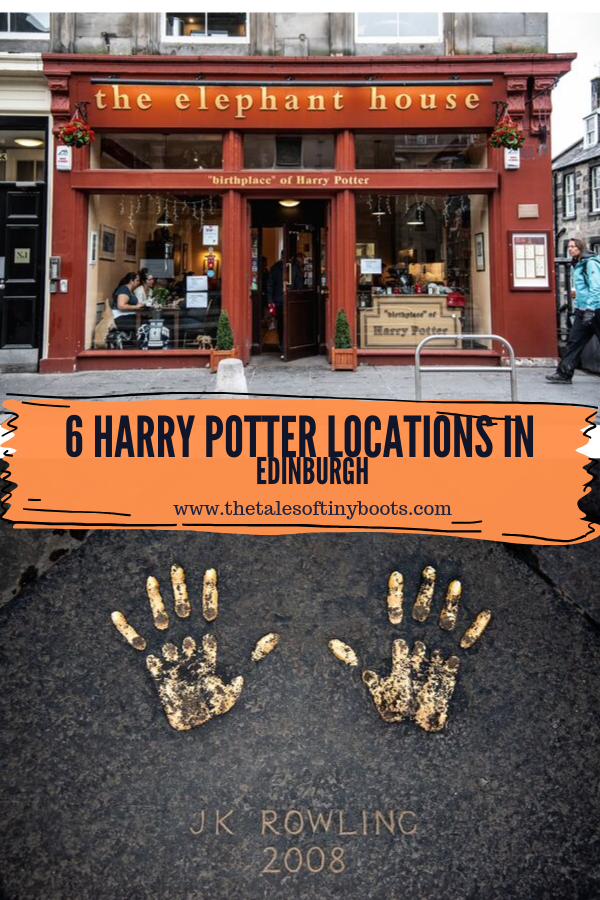 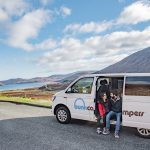 Wana explore in a camper? My experience with Bunk Camper 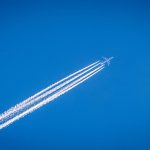