Had the best start 2019, with a walk around Malin head – the most northerly point in Ireland, and the Wild Atlantic Way.  I drove upto Donegal to be with Eoghan for the countdown – awhhh cute, not, we missed the coundtown haha. Me and Eoghan had unrealllllll New Years Day dinner in the Seaview Tavern. After we’d waddled back to the car we went straight to Malin Head to catch sunset.

I had really dressed for the occasion, layering up all my new warmest winter clothes. So happy with myself! A particular highlight was when an old lady complimented me on how bundled up I was. I didn’t complain once about the cold – a first for me. Eoghan must have been delighted ha.

Banba’s Crown was packed, but we headed further out to the cliffs and there was hardly anyone around.

As we made our way to the most northern point, a beautiful strip of yellow formed at the horizon. A gap to let the sun peak through the dense clouds above. It was just beautiful.

There was no wind and it was quite calm looking out to sea, but the waves were still hurling themselves at the rocks. The sound of them crashing into one another was immense. Every now and again an enormous boom would reverberate though the air and we’d turn around to see the spray shooting up.

We got to the edge just in time for sunset. There was so much cloud cover, but the strip of sky along the horizon was enough to see the gleaming sun sink below the skyline. I was so annoyed, I set up my shot and Eoghan walked right infront of it. I was calling him to move his arse but he couldn’t hear me “because of the noise”. Atleast, that’s the reason he gave for his partial deafness, I think he just wanted to get his shot first!!

The day wouldn’t have been complete without me forcing Eoghan to sit still so I could snap away. He doesn’t have the best patience god love em.

After a couple of photos, he always has enough. Once he refuses to cooperate I know it’s time to give up haha. He will literally look everywhere except the camera!

On the walk back to the car I had to stop and take another look. The rugged coastline, the waves thrashing around and the thick foam surfing ontop. One last breath of the fresh clean ocean air and then back to the car. Closing the door on the calming sound of the sea and back to the midlands again. 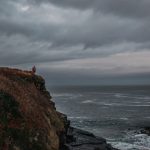